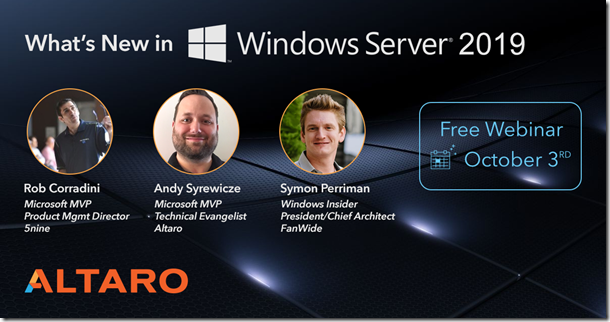 I’m glad to share with you information about Windows Server 2019 webinar which will be on October 3th provided from Altaro software. Please join us.

Whenever a new version of Windows Server gets released there’s always a lot of attention
and media coverage so it’s nice to have an hour-long session where you can sit back and let a panel of Microsoft experts cut through the noise and give you all the information you
need.
It’s also a great chance to ask your questions direct to those with the inside knowledge and receive answers live on air.
Over 2000 people have now registered for this webinar and I’m going to be joining too. It’s
free to register – what are you waiting for?
Save your seat: https://goo.gl/QixbPz

I’m very exited to share with you this amazing free webinar powered by Altaro where you can listen the one and only, Ben Armstrong, Principal Program Manager at Microsoft and co-creator of Hyper-V. 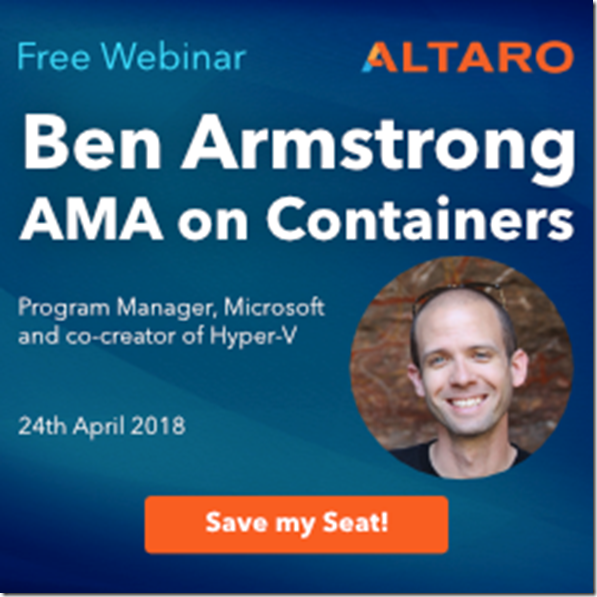 Think containers are just for developers? Think again. Containers have recently gained massive industry adoption and many IT pros are now being asked to support this new disruptive technology. Are you in the know?

Join us on April 24th for a very special webinar with the co-creator of Hyper-V, Microsoft’s very own Ben Armstrong. Andy Syrewicze from Altaro will be moderating this Ask Me Anything (AMA) webinar with Ben to answer all your burning questions about containers in the Microsoft ecosystem.

The discussion will include:

Designed for the next generation of IT workloads, containers enable a fast and reliable virtualization of individual applications. More lightweight than VMs, whilst delivering similar benefits, containers were historically confined to developers but are now an essential part of the modern day IT professional toolbox.

This webinar is a rare chance to find out directly from Ben Armstrong how you can use containers to enhance your virtual deployments by drawing on his special insights from the inner workings of Microsoft and over 20 years of experience developing operating systems and virtualization platforms. It’s an opportunity you cannot miss!

Want to ensure your question gets answered? Send your questions over facebook and twitter using the hashtag #AskBenArmstrong.

Unable to attend? Register anyway and we’ll send you the recording shortly after the webinar ends. All registrants will also receive a complete question list, gathered from social media and during the event itself, alongside full answers from Ben!

We look forward to seeing you there!